Due to postal issues we are not currently able to process orders to the United States, Canada and Australia

We hope you are all well! Here’s a little laugh from Thora Hird: “Until I got married, when I used to go out, my mother said goodbye to me as though I was emigrating.”  Made me giggle! 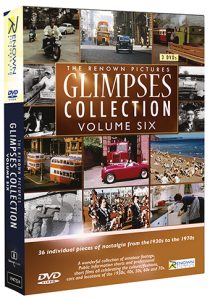 This month we are very excited to be bringing you Glimpses Volume 6. The hugely popular Glimpses series provides snippets of nostalgia from every era since the film camera was invented, with travelogues, vintage news and amateur shorts filmed throughout Britain and the world. We are offering our readers an exclusive special deal: if you buy the new box set for £20, you can also purchase any of the previous volumes at half price for just £10 each. This offer is for one month only so grab any of the series you are missing!

Among the delights on offer in this month’s newsletter are two great deals: the first is a combined purchase of the classic film The Titfield Thunderbolt on DVD and a fascinating book about the story of the actual train that was used for the Thunderbolt. The second combined offer is for a rare CD compilation of some of the greatest organists to appear at the famous Tower Ballroom in Blackpool, plus a book about the history of the tower. The people behind the cameras and backstage are those that make the magic happen – and we have a fascinating book by Ken Mellor about his life as a sound recordist in film and TV. Also a new release from the BFI: The Epic of Everest tells the story of mountaineering pioneers Mallory and Irvine; music from Ken Dodd and a compilation of country music by stars such as Loretta Lynn, Dolly Parton and many more. There’s a compilation of the surviving episodes of Hugh and I starring Terry Scott and Hugh Lloyd and – FRANK’S BACK! Not the Public Eye detective himself, but the walking tour of Frank Marker’s haunts in Windsor is scheduled for September.

Some sad news about dear friends; Alan Kibble, a true loss to the British film industry, supporter of Renown and TPTV, walking film encyclopaedia and dear friend. We were also very sad to hear of the passing of our good friend, Renée Glynne. The most-credited script supervisor in all of British cinema, she worked on many films, including Brief Encounter and worked for the Children’s Film Foundation and a number of Hammer films, a close friend and collaborator of director Terence Fisher. Working into her ninth decade, Renée was a pioneer. We send our sincere condolences to Renée’s family and friends. Condolences also to the family of Dennis Waterman, who we were sorry to hear just recently passed away.

Lots of premieres coming up on TPTV to keep you entertained and more news on our Christchurch Weekend by the Sea in July: as well as guests Melvyn Hayes and Derren Nesbitt, we are happy to confirm that our hosts will be Caroline Munro and Mike Read, who will also take part in a live Footage Detectives on the day with Noel, whose book can be seen below, with just a few of the very insightful reviews we have received from our readers.

We hope you enjoy this newsletter and find something of interest for you. Keep sending in your letters and you might be featured on the letters page! Also, keep spreading the word, now groups and meet-ups are back in full swing, we are always grateful for your support.

Please scroll down to see the rest of the newsletter, each page below is a link to the product it features – just click on the images.

Be a part of something special for fans of TV and Film History.

Receive our free newsletters with very special offers just for you.