Due to postal issues we are not currently able to process orders to the United States, Canada and Australia

As Betty Driver sang, ‘I got a hunch, happy days are here again,’ and we are so very excited to be seeing so many of you for our weekend in Stockport just a few weeks away. Last chance for tickets folks, it’s going to be a real day of TV and Film memories. We’ve lined up a great itinerary for Saturday and Sunday. For those of you who already have tickets for St Albans, don’t forget it’s Sunday 20th March 2022. We are also working on an event for the Saturday. New tickets for St Albans ticket holders with seat numbers will be posted after the Stockport event. 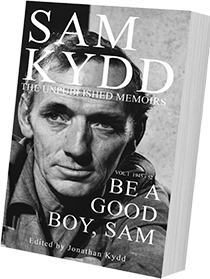 At last dear Jonathan Kydd has completed his book on his much-loved father Sam Kydd. It’s hot off the press and we are delighted to be able to bring it to you all, it’s called Be a Good Boy, Sam. More details below, but you may remember the project started years ago when he found his father’s diaries in his mother’s loft. We are working with Jonathan on a Sam Kydd Celebration Day with an official launch of the book. 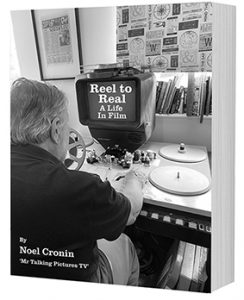 Talking of books, Noel’s book ‘Reel To Real’ A Life in Film is also at the printers, following his life from schooldays in north London to a job as a post-boy at Rank, then as a film editor in Soho in the Swinging Sixties and Seventies, starting a film distribution company, to the ground-breaking Talking Pictures TV. Those of you attending Stockport will be able to meet Noel and he will sign the book for you, if you wish. It’s been marvellous to see him on the screen in The Footage Detectives on Sundays on Talking Pictures TV, and the feedback has been wonderful, with many of you doing your own ‘Footage Detective’ work. Tune in on Sundays at 12pm for more lost treasures. 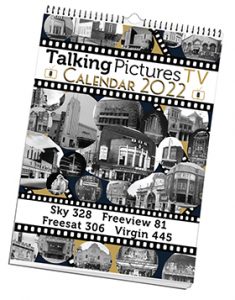 Good news! The 2022 Calendar is here! We listened to you, it’s now got bigger boxes for important dates. You can order yours now to be delivered in October – it’s packed full with film and TV history and stars we know and love, still just £10 with FREE UK postage!

Some real treats in this months magazine, including Saturday Morning Pictures Vol 3: The Green Hornet Strikes Again and don’t miss our Green Hornet Masks with carbon filters, exclusive to Renown. The third volume of the BFI Children’s Film Foundation Compilation is out and also from the BFI, Your Children and You, a nostalgic reminder by the COI of childhood in Britain from the 1940s to the 1980s. Secret Army is coming soon to TPTV and the 12-DVD box set is available in this issue. Our £20 offer this month features the great Paul Robeson, on CD and in The Proud Valley on DVD. Volume 6 of Look at Life is a fascinating 5-DVD box set on world affairs. A feature-length documentary, I Am Alfred Hitchcock provides a fascinating insight into the great man’s life and career. Classic TV comedy couple Terry and June appear in a 7-DVD box set and the 1964-65 series of Sherlock Holmes on DVD stars Douglas Wilmer and Nigel Stock. Our Renown Special Offer this month is 2 for £10 on The Story of Shirley Yorke and The Broken Melody. The Master of Gothic Cinema himself, Terence Fisher, features in a book by Tony Dalton, who also appears in The Cellar Club with Caroline Munro on Friday 24th September; the series is on every Friday night at 9pm. 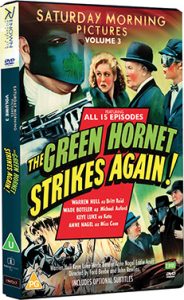 Sad news as we learn of the passing of dear Una Stubbs and more recently, Tony Selby and, of course, Jean-Paul Belmondo, all of whom will be very much missed but not forgotten.

Keep spreading the word folks and if our listings aren’t in your paper or magazine of choice – do ring or write to them, it really does help.

We hope we’ve found something for you to enjoy in this newsletter; as ever, we have tried to find films, books and TV memories that provide entertainment and interest for everyone. It all helps to keep the images flickering on that silver screen!

Please scroll down to see the rest of the newsletter, each page below is a link to the product it features – just click on the images.