Original newsreel footage of key people and events that shaped 1950, including the birth of Princess Anne, the de Havilland Comet, the launch of the new Ark Royal, Bing Crosby,
Lester Piggott – and much more.

A Year to Remember recalls the definitive events of the year 1950, with contemporary news coverage drawn from the world-famous BBC and British Pathé archives. This DVD details not only the major political issues that dominated the day, but also key social changes and cultural trends. This hour-long episode chronicles that remarkable year, 1950.

This was the year in which Clement Attlee’s Labour government narrowly won another term; the royals welcomed Princess Anne into the family; Queen Juliana of the Netherlands paid us a visit and Britain’s de Havilland comet made aviation history.

It was also a year dominated by the crisis in Korea. When the communist forces of North Korea crossed the 38th parallel, it signalled the beginning of a war which ultimately cost the lives of millions.

1950 was certainly a year to remember. 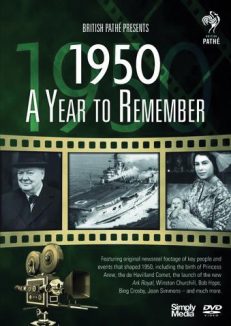