The Last Voices of World War One Complete Series on DVD

What was it really like to be a British ‘Tommy’ fighting in the trenches of the First World War? How did it feel to face the wire, the machine guns, the artillery barrages, and the poison gas cloud? To see your friends and comrades dying all around you day after day? This award-winning factual series draws on a unique collection of one hundred interviews with World War One veterans in which the soldiers and their loved ones relive all the heroism and heartbreak of the years from 1914 to 1918. All six original episodes are included. Most of these men had never been interviewed before or since. It features the first ever interview with Harry Patch and the only ever interview with Henry Allingham, who were the two last surviving veterans of WWI and went on to live to 111 and 113 years old respectively. All the voices are now silent.

Powerful, moving and important, Last Voices of World War One provides the most in-depth and wide-ranging oral history of the British experience of the First World War ever recorded on film.

Filmed over ten years, this landmark series draws on a unique collection of filmed interviews with veterans who experienced the most traumatic war in human history.

The show features interviews shot by Steve Humphries and Richard van Emden in the early 1990s with many of the surviving veterans who were, at that stage, well into their 90s. All of these veterans have subsequently died.

Their stories are vividly illustrated throughout with original archives,  photographs and high quality dramatisations that serve as a timeless reminder of the cost of war.

‘Very moving. Full of salutary reminders of the sacrifices made for the freedoms we enjoy today.’ Daily Mail 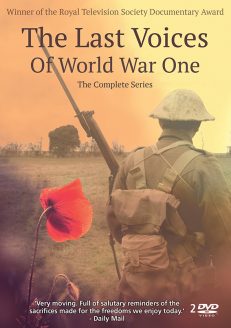 You're viewing: The Last Voices of World War One Complete Series on DVD £20.00
Add to cart