PAINTED BOATS and BARGING ROUND BRITAIN with JOHN SERGEANT

Just £20  for both with free UK Postage.

Painted Boats is an endearing film that follows life upon the canals of Britain and the colourful characters who call them home. Featuring an early performance from Jenny Laird, Painted Boats is a charming film that preserves a rarely portrayed part of British life and an almost forgotten part of our history. Director Charles Crichton shows a country on the edge of change as we witness the trials and tribulations of two families, one extremely traditional and the other ready to embrace the future of engine powered canal boats. Filmed on location, Painted Boats includes vintage footage of London and its canals in the post-war era.

Barging Round Britain with John Sergeant

A stunning guide to Barging Around Britain.

Britain’s canal network is a national treasure, brimming with undiscovered history and home to a vibrant community rooted in a unique way of life. John Sergeant sets off on a rich and colourful voyage along the eight best canal journeys Britain has to offer, from the gentle downs of Somerset, via the breathtaking countryside and engineering of the Welsh Llangollen, to the dramatic splendour of the spectacular coast to coast Caledonian Canal in the north of Scotland. At every step of the way, John immerses himself in living history, bringing the past to life by rolling up his sleeves, getting stuck in and
having a go at canal practices past and present. 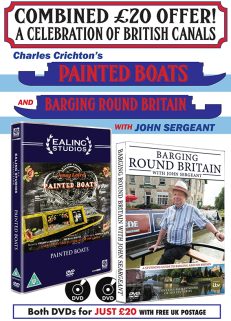 You're viewing: A CELEBRATION OF BRITISH CANALS £20 COMBINED OFFER! £20.00
Add to cart