A Part Worth Playing

Derek Fowlds, (2 September 1937 – 17 January 2020), is known the world over for his countless appearances in many household favourite television dramas and films.

From apprentice printer to armed forces disc jockey, from the West End to Broadway, from the silver screen to worldwide television fame, he worked alongside some of the greatest names in showbiz, including Alec Guinness, Kenneth More, Dirk Bogarde and Gina Lollobrigida. He shook Sinatra’s hand. He appeared on screen or stage with Laurence Harvey, Helen Mirren, Daniel Craig and Benedict Cumberbatch. Then there’s also been a note or two with Gary Barlow and Simon le Bon. A whole generation embraced “Mr Derek” when he appeared alongside the outspoken Basil Brush, and a nation laughed at the classic BBC comedy Yes Minister, in which he starred with Paul Eddington and Nigel Hawthorne. He played Oscar Blaketon in eighteen series of the still hugely popular Heartbeat series.

With his heart resting openly on his sleeve Derek speaks candidly of his  personal life, his adoring mother and sister, his two wives, many lovers and one true love. It is a story that swings from triumph to bitter disappointment, from glorious joy to terrible tragedy. Undaunted, he embraced life until the end and his unique voice brings warmth to his personal tale in this memorable autobiography. 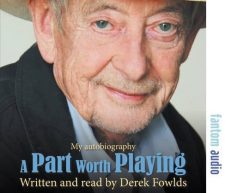