A Rainy Afternoon at the Flicks Volume One

Recreating a good old fashioned afternoon at the flicks with a newsreel, old advert, a short and main feature with the National Anthem at the end! Three DVD collection. Includes 7 films plus bonus features.

BONUS FEATURES: A Bob in the Pound (1943) Featuring the voice of Tommy Handley. Learn to save with this animated karaoke-style cinema short!
Felix Follows the Swallows (1925) Directed by Otto Messmer. Produced by Pat Sullivan. An animated short cartoon classic. Winter in his hometown is too cold for Felix, so he decides to build some wings and fly south to the warmer tropical jungles.

BONUS FEATURES: News Thrills of 1942 – Glimpses Highlights of the important war news events from the year 1942. The footage also includes the attack on Pearl Harbour.

BONUS FEATURES: The Day Begins Early (1948) A short behind the scenes look at the actress and singer Petula Clark’s working day in 1948.

She Knows Y’Know (1962) Directed by Montgomery Tully. Produced by Maurice J. Wilson. Starring Hylda Baker, Cyril Smith, Peter Myers, Linda Castle, Tim Connor, Neil Wilson, Alfred Burke, Lucy Griffiths, Leonard Sachs and Patricia Shakesby. The studious son of a working-class matriarch gets in trouble with the attractive daughter of a middle-class family, who accuse him of being responsible for getting her pregnant.

BONUS FEATURES: Yesterday Lives Again: Glimpses. A collection of rare newsreel footage from the early 1900s including the Wright Brothers.
Aladdin and his Wonderful Lamp (1934) Directed by Ub Iwerks and Shamus Culhane. A fast moving early animated short cartoon based on the famous Aladdin story. The film was a co-production of the Ub Iwerks Studio and Celebrity Productions.

A Cry from the Streets (1958) Directed by Lewis Gilbert. Produced by Ian Dalrymple. Production Manager: John Dark. Starring Max Bygraves, Barbara Murray, Colin Petersen, Dana Wilson, Kathleen Harrison and David Bushell. The film revolves around social worker Ann Fairlie, who is assigned to help a group of orphans that live in a poverty-stricken institution located in a rough part of town. 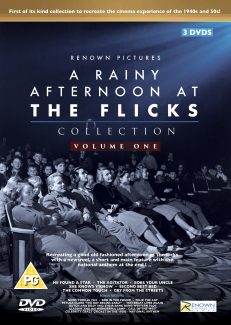 You're viewing: A Rainy Afternoon at the Flicks Volume One £20.00
Add to cart