A SPECIAL OFFER from The BFI and RENOWN! The Miners’ Hymns AND Tinker

A SPECIAL OFFER from The British Film Institute and RENOWN!

The Miners’ Hymns AND Tinker

This elegy, in film and music, of the coal mining history of North East England is the product of an exceptional creative collaboration between renowned filmmaker Bill Morrison (Decasia) and acclaimed musician and composer Johann Johannson. Collaged in 2010 from archive film footage and drawing on the region’s brass music culture, The Miners’ Hymns celebrates the labour, endurance, vibrant sense of community and rich culture that characterised the lives of those who worked underground.

Illustrated booklet with essays and notes.

This 1949 drama documentary tells the story of Derek Smith (Tinker), a gypsy boy who runs away to join a community of young boys training to become mine workers.  He makes friends and begins learning the ways of the world. However, when a theft occurs, all fingers point to the gypsy boy and his new-found happiness is threatened. The story of his perseverance makes an interesting and moving social documentary.

Tinker was filmed on location in Easington, a coastal colliery villages on the East Durham coast, with mostly non-professional actors. Scenes showing the boys going down the mine are both claustrophobic and realistic. With his wife,  Alfredda Brilliant and author Louis Golding, Marshall also wrote the story for Proud Valley (1940), starring Paul Robeson. 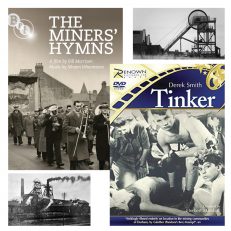 You're viewing: A SPECIAL OFFER from The BFI and RENOWN! The Miners’ Hymns AND Tinker £15.00
Add to cart