Adam Faith! All The Hits CD

Adam Faith! All The Hits

THE DEFINITIVE COLLECTION ON ONE CD

Londoner Adam Faith was one of the most charted artists in the early sixties in the United Kingdom. A British teen idol and actor, his early success came mainly through his partnership with songwriters such as Les Vandyke and John Barry, who wanted to create a British Buddy Holly. Faith released six albums and 35 singles with 24 chart entries. Ten singles made the Top Five. “What Do You Want?” was the first number one hit for Parlophone, at the time, Faith was the only pop act on the label. With songs like “Poor Me” (another chart topper) and  “Someone Else’s Baby” (a UK No. 2) he was established as a rival to Cliff Richard in British popular music.

His début album Adam was released on 4 November 1960 to critical acclaim for the inventiveness of Barry’s arrangements and Faith’s own performances.

Still 20 and living with his parents, he bought a house in Hampton Court for £6,000, where he moved with his family from Acton. In December 1960, he became the first pop artist to appear on the TV interview series Face to Face with John Freeman. In 1961, Faith appeared in the film What a Whopper, with Sid James, Spike Milligan, Wilfrid Brambell and Carole Lesley. It was written by Terry Nation, and had music by John Barry; Faith sang the title song, “The Time Has Come”. He also appeared in films such as Beat Girl (1960), Never Let Go (1960) and the television drama No Hiding Place. He played opposite Dame Sybil Thorndike in the stage play Night Must Fall, and in 1962 he co-starred with Donald Sinden and Anne Baxter in the film Mix Me a Person.

7. Lonely Pup (In A Christmas Shop)

23. A Message To Martha (Kentucky Bluebird)

24. Stop Feeling Sorry For Yourself 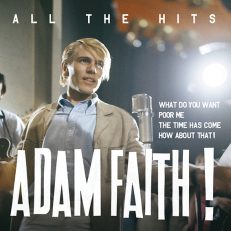