The first 100 orders will also receive a photo personally signed by Anita!

Give a Little Love at Christmas

IN MY LIFE and ROCKIN’ GOOD WAY (with Peter Gill)

Anita Harris was discovered at London’s Queen’s Ice Skating Rink aged 16 and a contract in Naples and six months in Las Vegas followed. Returning to Britain, Anita sang with the Granadiers and the Cliff Adams Singers on Radio and TV. She represented Britain in three European Song Festivals and in 1966 made the first of many London Palladium appearances. The following year Just Loving You stayed in the charts for 30 weeks, receiving a double gold. Anita has performed at seven Royal Command Shows, made six TV series with David Nixon and her own children’s TV show, Jumbleland. She has starred in many pantomimes, played Grizabella in Cats and recently toured in Stepping Out and Double Double. 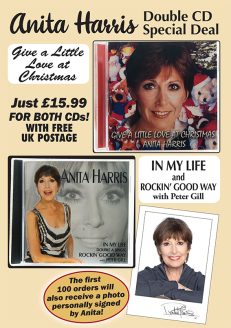