The Strange World of Gurney Slade (1960) on DVD

Spectacularly ahead of its time, The Strange World of Gurney Slade was brilliantly inventive, startlingly surreal and unlike anything previously seen on television. Anthony Newley stars as an actor who walks off the set of a banal sit-com and into a fantasy world of his own imagination where he speaks to animals and inanimate objects, characters step out of advertising posters and where he can hear the most intimate thoughts of passers-by. Created by Newley and written by Sid Green & Dick Hills, (later key writers for Morecambe & Wise), the series has been newly transferred from the original 35mm film elements for this release.

This fascinating collection compiles all of Anthony Newley’s solo recordings made during the development of his musical The Good Old Bad Old Days, featuring several songs that were later cut from the final West End production. The recordings featured on this album are previously unreleased and have been restored from Newley’s own private archive.

The Good Old Bad Old Days was Anthony Newley and Leslie Bricusse’s third musical written for the stage and originally intended as a Broadway comeback for Newley after several years of performing his one-man show in Las Vegas. Written between 1971 and 1972, the musical was conceived as “a simple little saga about Man, Life, Death, God and the Devil, with the History of the World thrown in.” The score is considered to be one of the most accomplished musical works Newley and Bricusse created during their illustrious writing  partnership. Songs from the show were later recorded by Sammy Davis Jnr, Tony Bennett, Frankie Vaughan and Petula Clark.

Tracks:   The Good Old Bad Old Days; The Fool Who Dared To Dream;  The Wisdom Of The World; A Cotton Pickin’ Moon; We’ve Got A Cure For Everything On Broadway; And Women Must Wait; Today; Tomorrow; Yesterday; Thanksgiving Day; I Do Not Love You; The Good Things In Life; The People Tree; It’s A Musical World; The Wisdom Of The World (Alternate Version); Hell Of A Night; It’s A Funny Old World; Musn’t Grumble Can’t Complain; What’s The Matter God? (Live); Mister Sniffles.

JUST £20 for both with Free UK Postage 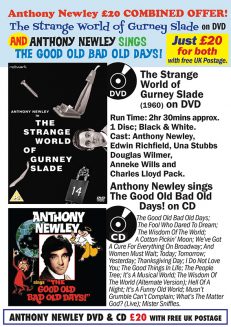