View cart “Armchair Theatre on DVD Volume 1” has been added to your cart.

Armchair Theatre was ITV’s flagship drama anthology series. Initially screened between 1956 and 1973, it was hugely popular, with viewing figures occasionally reaching twenty million. Pioneering, influential and challenging, the series became a showcase for the post-war generation of British writers and actors. The series featured powerful, award-winning plays, and had a lasting influence – testament to producer Sydney Newman’s passionate belief in television’s potential to bring high-quality drama to the viewing public.

The Death of Glory

The Square of Three According to the Rules 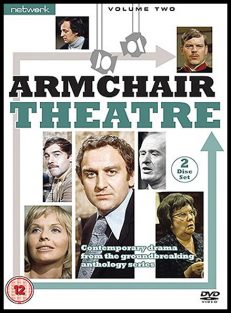 You're viewing: Armchair Theatre on DVD Volume 2 £15.00
Add to cart