Assignment Redhead stars Hollywood’s Richard Denning as the secret agent, Carole Mathews as the luscious nightclub vocalist and Ronald Adam as the chameleon-like criminal. It`s a story of murder, counterfeit money and international crime with a pinch of Nazis. A Butchers 1956 production, based on a novel by Al Bocca, Assignment Redhead was released in the US (in a radically chopped-up version) as Million Dollar Manhunt. Quite a good little feature with picture and sound of good quality after some extensive restoration. 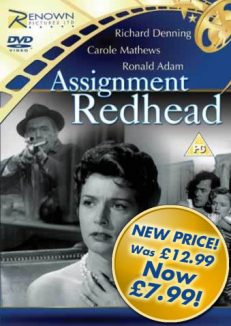