Battle of the V.1

The First Ever Release of This Classic British Film on DVD. Digitally Re-mastered & Restored. Michael Rennie stars in this action-packed thriller set in occupied Europe during WWII, In Colour For the Very First Time . Set in World War II and based on a true story, Battle of the V.1 starring Michael Rennie, Patricia Medina and Christopher Lee is set in Nazi held Poland. Polish Resistance discover a mysterious pilot-less plane being built and tested in Poland – the resistance inform Britain of the plane and British enlist a Polish school teacher (Michael Rennie) to infiltrate the factory where the strange plane was being built and pass as much information as possible back to London. The film tells the vital role that the Polish Resistance and the British bombing raids served in averting the full impact of the V.1 flying bomb in World War II. Starring Patricia Medina… the most beautiful face in the whole of England . 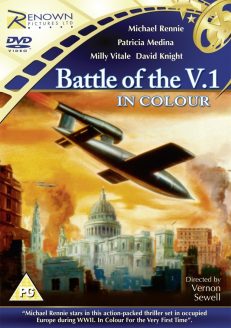