A collection of John Betjeman’s most inspirational documentaries.
Join him on an unforgettable journey around the UK in search of the finest gems of traditional British architecture.

To celebrate his legacy this collection brings together three of Betjeman’s celebrated BBC documentaries: A Passion for Churches, A Bird’s Eye View and Four with Betjeman: Victorian Architects and Architecture.

Each programme displays Betjeman’s infectious enthusiasm for architecture, and showcases his enduring appeal.

Sir John Betjeman was one of British television’s most loved personalities. A prolific writer, poet, broadcaster, and active architectural campaigner and conservationist, Britain’s former Poet Laureate was also celebrated for his unwavering devotion and life-long passion for traditional architecture. A champion of British heritage, Betjeman worked closely with the BBC to produce many critically acclaimed documentaries. Known for his wry and honest opinions, he travelled to places of great architectural and historical importance and eloquently explained their significance. He helped to open our eyes to the true value of the buildings and places around us.

Contained in this 3-DVD Collection:

John Betjeman’s A Passion for Churches (1974)

John Betjeman travels around the Diocese of Norwich visiting various churches. He offers an honest and affectionate look at the buildings, clergy and parishioners in this documentary. It exposes the details within some of our common traditions; from the quirks of great architecture to the allure of bell-ringing and jumble sales.

This four-part series includes footage of Britain’s most stunning and historically fascinating churches, and follows him to modern day Jerusalem where he attends Christmas services at the Monastery of St. George.

A three-part series commentated by John Betjeman giving a birds-eye view of various locations important to English history and heritage, filmed entirely from a helicopter. Betjeman’s informative travelogues give a fascinating look at how Britain has changed over time, from a new perspective. Betjeman gives his opinion on places of importance, giving us a glimpse into the country’s history in the process.

In the 1850s, English architects chose the Gothic style to compliment steam, glass and cast iron. In this four-part series John Betjeman, a founding member of The Victorian Society, celebrates the architects associated with the Gothic Revival and some of their famous constructions; including the Houses of Parliament, All Saints Church, St Pancras railway station, the Natural History Museum, the Albert Memorial, Westminster Abbey and a variety of country houses. 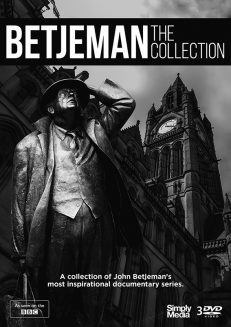 You're viewing: BETJEMAN THE COLLECTION £20.00
Add to cart