View cart “BLITZ ON BRITAIN DVD” has been added to your cart.

Written and narrated by one of the world’s most revered broadcasters, Alistair Cooke, this is a moving and unforgettable account of the famous defence of Britain, May 1940 to
10th May 1941.

BLITZ ON BRITAIN is the first full record of what Sir Winston Churchill has called one of the decisive battles of the world: the battle that was fought in the streets and homes of Britain
and turned every civilian into a front-line soldier. It traces the full ferocity of Hitler’s attempt to defeat Britain. It begins on the 10th May, 1940 and ends with the Great Fire of London exactly one year later. Using film shot in combat by both British and German crews, it sets the Blitz in the context of Nazi invasion plans… It is the story of the raging conflict between arrogance and guts… between military might and the dogged, spirited endurance of the people Hitler called ‘decadent’. 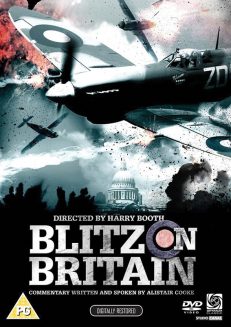