Joe English learned to fly a Lancaster bomber before he could drive a car. During World War II, RAF Bomber Command called upon young men barely out of their teens to fly some of the most dangerous missions of the entire war. In 1943, the life expectancy of an air gunner was just three minutes in combat. For every 100 Bomber Command aircrew, only 24 would survive their tour… Joe English is reunited with five other surviving Canadian aircrew, to tell their stories for the first time.

Joined by other surviving Bomber Command veterans, they provide a moving insight into life – and death – as one of the ‘Bomber Boys’.  This dramatic four-part documentary series follows a new generation of young men, all of whom are descendants of WWII veterans, as they undergo training to become a Lancaster aircrew, providing them with an insight into what their grandfathers endured – and the sacrifices they made.  While these new recruits struggle to come to terms with 1940s discipline and values, we hear the harrowing stories of the “real” Bomber Boys,  who flew into the night skies over Occupied Europe to fight some of the most critical battles of the war.  The veterans and their grandchildren experience an unforgettable flight in one of only two surviving airworthy Lancasters before visiting the graves of wartime comrades in Europe.

A special bond emerges, building a bridge between the generations and creating new understanding of the experiences of those who fought in the Second World War. 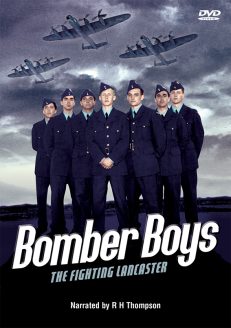