A rule of mine is this, there are always three hot directors and one of them is always David Lean,’

One of the best known and most admired of British film makers, David Lean’s directorial career spanned five decades and encompassed everything from the intimate black-and-white romance of Brief Encounter (1945) to the spectacular 1962 Technicolor epic, Lawrence of Arabia.

This book offers comprehensive coverage of every feature film directed by Lean, with new insights on the classics of his career as well as its lesser-known treasures. The book analyses his approach, with an emphasis on the important roles played by women throughout Lean’s career.

Drawing extensively on historical materials to produce in-depth insight into his individual films, David Lean offers a fascinating and original account of the work of a remarkable British film maker. The book also features a complete filmography. 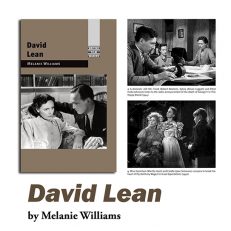