View cart “BOOK OFFER: Hooray For Jollywood” has been added to your cart.

Paperback book. 276 pages. With many photos and illustrations throughout.

“A splendid evocation of a golden era of Mancunian and Lancastrian humour… a book I could happily read over and over again.”
Manchester Evening News

The most prominent of the regional British studios was The Mancunian Film Corporation, founded by John E. Blakeley. From the 1930s to the 1950s, his company produced a string of northern comedies. All the films he made were produced solely for northern audiences. His films were initially shot in London, although they were planned and conceived in his home city, Manchester. Made on a shoestring budget and usually without a storyline, his stock company of popular northern music hall eccentrics made the films extremely popular with the Lancashire working-classes. His stars included George Formby, Nat Jackley, Norman Evans, Duggie Wakefield, Jewel & Warriss, Josef Locke and, of course, the inimitable Frank Randle.

The Life of John E. Blakeley and the Mancunian Film Corporation

In 1947, when the British film industry was on the verge of collapse, Blakeley announced that he was opening a new studio. Unthinkably, this studio would be in Rusholme, Manchester, making it the first feature film studio outside the capital. Blakeley spent £70,000 converting an old Wesleyan church in Dickenson Road, Rusholme, into what became fondly known to Mancunians as the “Fun Factory” or “Jollywood”. John E. Blakeley built up a stock company of comic eccentrics from northern music halls to star in his films along with local actors, all of whom proved a huge hit with cinema goers. He was the first to spot the film potential of Lancashire’s George Formby, putting him in his first two films, Boots! Boots! and Off the Dole. Shortly after, George Formby was snapped up by the Ealing film studio. Others in Blakeley’s stable were northern comic favourites Norman Evans, famous for his ‘Over the Garden Wall’ sketches, Sandy Powell, Harry Korris, Jimmy James and Jimmy Clitheroe, along with a host of others. Undoubtedly, Blakeley’s biggest star and money-spinner was Frank Randle, who made ten record-breaking films, eight for the Manchester studio.

At a time when the American studios were splashing out millions on their productions, Blakeley’s budgets never ran more than a few thousand per picture, yet his films often attracted higher attendance figures than the American imports, all making a profit at the box office. The first picture shot in Blakeley’s Manchester studio was Cup-Tie Honeymoon, starring Sandy Powell. Featuring sequences shot at Manchester City’s old Main Road ground, the film gave a film debut to future Coronation Street star Pat Phoenix, then known as Pat Pilkington. The ten years between the first and last film, It’s a Grand Life starring Frank Randle and Diana Dors, produced films such as: Somewhere in Camp; Somewhere on Leave and Home Sweet Home, (all with Frank Randle) and Demobbed, (with Norman Evans and Nat Jackley. On its closure in 1953, the studio was taken over by the BBC to become their first regional TV studio.

When John E. Blakeley died in 1958, George Formby said, “He found a lot of talent; he never produced any epics, but he did a lot for British films. John made people laugh when they needed it most”. With John E. Blakeley’s son, Tom, at the helm, the company moved into the lucrative ‘B’ movie market with a succession of crime films, including: Those People Next Door; The Break ; Tomorrow at Ten; Blind Corner; The Painted Smile and The Marked One. 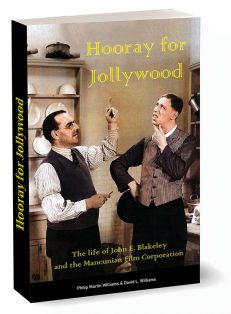 You're viewing: BOOK OFFER: Hooray For Jollywood £17.00
Add to cart