A Biography by Louise Bremner

Born in Birmingham in 1929, Jacqueline Hill lost her parents in early childhood and spent her adolescence working in a factory. In the post-war years, a scholarship to RADA helped her escape to a new life in London – and she never looked back. Although best known for her performance as Barbara Wright, one of the very first Doctor Who companions, her career on the small screen began a decade earlier, in the days following the landmark Coronation TV broadcast of 1953.

Her appearance on a BBC talent show that summer brought her overnight success, although it soon became clear just how easily that might slip away. During the next ten years, Jacqueline established herself as a leading actress of skill and sensitivity alongside the likes of Sam Wanamaker, Sean Connery and Maggie Smith. She played roles in The Blue Parrot (1953) and The Comedy Man (1964) and by the time she led viewers into the TARDIS for the first time, she was a seasoned professional, familiar with every aspect of a rapidly changing industry. Jacqueline’s story, told here with the help of new research and interviews, is one of the resilience and determination in both her private life and her career. It offers a snapshot of television history, and shows for the first time how her early experiences prepared her to take on the role she played so memorably in Doctor Who. 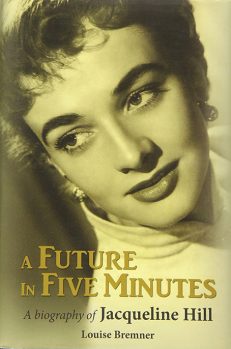