KATE ELPHICK and NIGEL DENISON are ideally placed to write the first biography of Michael Elphick. Kate is his only child and Nigel was a close friend of Michael’s for many years. Foreword by Neil Morrissey.

Michael Elphick was a young electrician working at the Chichester Theatre when he was discovered by Laurence Olivier, who arranged for him to join the Central School of Drama. It was here that he met Bruce Robinson, who would later cast him in one of the most popular British films of all time – Withnail and I. Elphick’s illustrious career also included major supporting roles in films such as Quadrophenia, The Elephant Man, Gorky Park and Dennis Potter’s Blue Remembered Hills. On television, there was Private Schultz and Boon, which gave his acolyte and friend, Neil Morrissey, his first starring role.

One of the characters played by Elphick owned houses in Coronation Street whilst another wooed Peggy Mitchell in Eastenders. However, Elphick’s private life was every bit as varied as his acting career. Racked by alcoholism and devastated by the early death of his partner, Julia, Elphick sadly died at the age of 55. His friends and family will always remember his hugely humorous personality, and everyone he met was left with a ‘Mike Elphick story’. 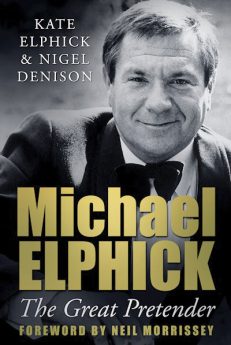