Secret Shepperton explores the history of the town from its early origins as an Iron Age settlement nestling on the banks of the River Thames. It’s the place where Caesar crossed the river in AD 54. Subsequent river finds reveal that this area regularly encountered invaders, such as the Saxons, who grazed sheep here and called it Shepperton. It’s always been a place that attracts artists, including Turner and Constable as well as writers such as Charles Dickens and H. G. Wells.

In the twentieth century, Shepperton was dubbed the playground of London and Richard D’Oyly Carte bought an island there to build a mini version of his Savoy Hotel. In 1931, Sir Richard Burbridge, Chairman of Harrods, sold his Shepperton mansion, Littleton Park House, to film producer Norman Loudon at a time when ‘the pictures’ were in their infancy, but a new fad was catching on – films with sound. Sound City was the forerunner of Shepperton Studios, still operating today and known throughout the world as the ‘Hollywood of England’. 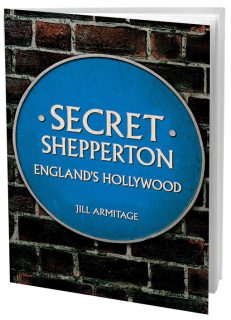