View cart “The Old Joke. A novel by Reina James, daughter of Sid James.” has been added to your cart.

A gripping history of BRITISH CINEMA

This fascinating history of British cinema is sometimes shocking, with scandal including suicides and contract killings, but it also provides insight into our silent film heritage and more, extending to the evolution of the British film industry. The author interviewed those who remembered those days, often capturing last memories. The book combines meticulous research with interviews to highlight areas of British national cinema worth re-examining, with intimate portraits of many of the players from the early days of British cinema. An interview with 1930s ‘Quota Quickie’ producer Anthony Havelock-Allan, highlights their positives. He argued that the ‘Quota Quickies’ offered low-budget training to a generation of British film makers: Sir David Lean CBE, Sir Terence Rattigan CBE and Robert Morley CBE among many others.
This study is passionate, accessible and well-researched. Shepperton Babylon is a worthwhile journey of rediscovery.

“A lively alternative history of the (British) studios.” The Independent 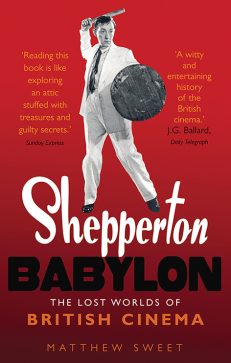