This book reveals the fascination every child of the 1950s felt for the sci-fi genre. The book includes reviews of Journey Into Space, The Lost Planet and Dan Dare on UK radio, plus a round-up of sci-fi radio broadcasts in the UK and America. British TV at the start and end of the 1950s is covered, including The Invisible Man, Nineteen Eighty-Four and Quatermass, plus other SF TV programmes in the UK and America. Films released in the 1950s are listed, with in-depth analysis of classics such as Destination Moon, Invaders From Mars, It Came From Outer Space, The Day the Earth Stood Still, Forbidden Planet, This Island Earth, Invasion of the Body Snatchers and War of the Worlds, as well as 1950s science fiction in comics and magazines, including Dan Dare in The Eagle, American sci-fi magazines and British magazines that emulated the Americans. The book also includes a list of sci-fi magazines published in the 1950s. The books of John Wyndham, Ray Bradbury, Isaac Asimov, Arthur C. Clarke and many more popular sci-fi authors also feature. 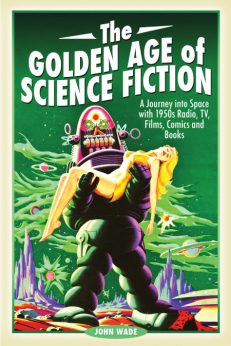