A fantastic collection of pictures and information featuring West Yorkshire’s cinemas and theatres.

Nobody could have predicted in the first half of the Twentieth-century that ‘going to the flicks’ would be rapidly superseded in later years by television. Buildings of all sizes and descriptions – some having only existed for a relatively short time – quickly became redundant and have struggled for survival or an alternative use since the demise of cinema-going. In the heavy industrial areas of West Yorkshire, particularly Bradford and Leeds, there was a great need for entertainment.  In some ways, it was only natural that the new film industry should give rise to purpose-built cinemas across the entire region.  Although theatre-going declined with the growth of the cinemas, it is pleasing to note that live theatre is still very much alive today in a number of the towns and cities covered here.

The various developments of screen and stage in West Yorkshire have been admirably captured over the years by the Yorkshire Post’s photographers and are featured in this book. Peter Tuffrey has made it quick and easy to examine the history – and in many cases find a picture – of a favourite cinema or theatre.

Author Peter Tuffrey was born in Doncaster and studied Fine Art at Doncaster College of Art and Leeds University until 1974. He was Keeper of Fine and Decorative Arts at Doncaster Museum and Art Gallery and PR Media Consultant for Doncaster Rovers. He now works as a freelance writer. 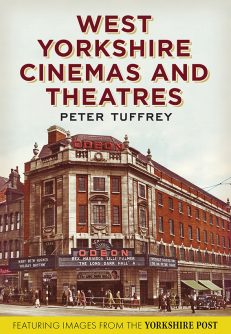