BOWIE The Man Who Changed the World DVD

BOWIE The Man Who Changed the World DVD

Combining footage from interviews with the late, great David Bowie and contributions from those who knew him personally, this documentary celebrates the illustrious life of one of the greatest artists to ever grace the stage. Featuring exclusive contributions from those who worked with Bowie and interviews with the man himself. The footage of interviews with Bowie throughout the DVD is fascinating, giving a real insight into the man, his music, his outlook on life, business and the world. He comes across as an intelligent person with a very down to earth attitude, nevertheless someone who had real vision. Others who make an input include the music pundits Paul Gambacinni and Bob Harris, who give their own perspectives on Bowie. The footage of Bowie performing covers every era of his musical career, including a glimpse of him performing with Marc Bolan, a real musical treat. A must-have for music lovers, the documentary has a wide appeal, set against the changing times of the last few decades. 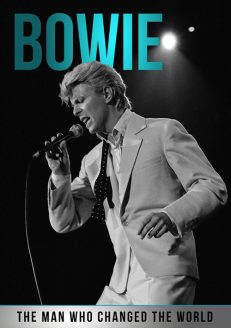 You're viewing: BOWIE The Man Who Changed the World DVD £15.00
Add to cart