Bottoms Up!
The Iron Maiden
Don’t Bother To Knock
She’ll Have To Go

Laughter all the way with this set of four film comedies from the 60s starring Jimmy Edwards, Elke Sommer, Bob Monkhouse, Michael Craig and many more.

Richard Todd plays a philandering travel agent with too many girlfriends for his own safety in this delightful romantic romp. His troubles begin when he gives a spare key to his flat to each of the girls he meets on a continental holiday – all of whom turn up just as he is about to get married!
Stars: Richard Todd, Nicole Maurey, Elke Sommer, June Thorburn, John Le Mesurier, Rik Battaglia, Judith Anderson, Colin Gordon and Ronald Fraser.

SHE’LL HAVE TO GO

When Francis and Douglas Oberon learn that their late grandmother has bequeathed the family fortune to a distant cousin, they plot to get the money, dreaming up a plan that can’t fail – the lovely heiress must be either married or murdered …

Aviation designer Jack Hopkins’ is absent from his latest test flight, miles away indulging his greatest passion: an old traction engine called The Iron Maiden. Jack has his heart set on entering the Annual Steam Rally at Woburn Abbey, but hasn’t reckoned on some fierce and devious opposition! Michael Craig plays the engineering genius with Alan Hale as the tycoon who comes to share his passion. 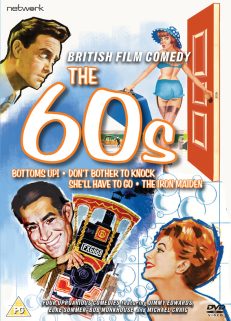