It’s an incredible four decades since Catweazle arrested the boredom of Sunday afternoons to become a television legend, and on this special edition DVD set of both series he returns to enchant a new generation with his unique brand of magical comedy.

Filled with humour, warmth and charm, Catweazle captured the imagination of children everywhere with Richard Carpenter’s wondrous story of a bumbling magician and his pet toad, trapped nine hundred years ahead of their own time. Unforgettable for Geoffrey Bayldon’s entrancing performance as Catweazle the wizard, the series also boasted a superb regular cast, while guest appearances by some of Britain’s finest actors of the period – including Hattie Jacques and Peter Sallis – ensured the quality status of the production.

Catweazle is a magical dip into the past for those who saw these series originally, and a special treat for everyone who will experience this classic for the first time.

Special Features:
[] Brand-new introduction to the series by Geoffrey Bayldon
[] Brothers in Magic – Geoffrey Bayldon and Robin Davies are reunited after thirty years, at the Hexwood Farm location, to reminisce about the filming of Catweazle
[] Commentaries with Richard Carpenter, Geoffrey Bayldon, Joy Whitby and Robin Davies
[] Anglia News – Richard Carpenter interview, from 1970
[] Extensive image gallery including behind the scenes and many previously unseen
[] Merchandise image gallery
[] PDF material including merchandise, magazines, annuals and scripts for all episodes, including an unfilmed episode, The Horned Dragon
[] Commemorative booklet 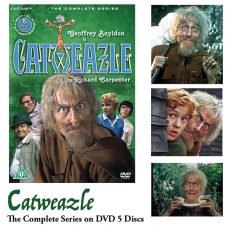