Silent with music and intertitles

Charlie Chaplin entered the film industry in 1914 and by 1916 was the highest paid entertainer in the world after signing a contract with the Mutual Film Corporation for a salary of $670,000. Mutual built Chaplin his own studio and allowed him total freedom to make 12 two-reel films during a 12-month period, which have been brought together for the first time on this two-disc box set. Chaplin subsequently recognised this period of film-making as the most inventive and liberating of his career.

These twelve films demonstrate the breadth of Chaplinís abilities as both a physical slapstick actor and a subtle, endearing character actor. The collection includes the slapstick custard pie fights of Behind the Screen and his first minor masterpiece, The Vagabond, which combines pathos and comedy to create a lyrical love story.

This collection of Chaplin films has been fully restored and features music by acclaimed silent film composer Carl Davis.

Scores by Carl Davis on all 12 films

Alternative scores for each film by a range of composers, including Neil Brand, Antonio Coppola and Stephen Horne

Films included: The Floorwalker, The Fireman, The Vagabond, One A.M., The Count, The Pawnshop, Behind The Screen, The Rink, Easy Street, The Cure, The Immigrant, The Adventurer. 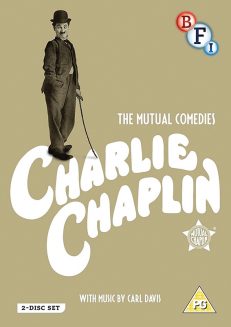