CHILD IN THE HOUSE / THE SCAMP / FRONTLINE KIDS

Child In The House 1956 – With her mother in hospital and her father (Stanley Baker) on the run, 11-year-old Elizabeth (Mandy Miller) is sent to live with her sniffy aunt (Phyllis Calvert) and rigid uncle (Eric Portman). Her presence has an unexpected effect on all concerned. A Britishmade drama, co-directed by Cy Endfield (Zulu) and jam-packed with such stalwarts of the acting profession as Dora Bryan, Joan Hickson and Alfie Bass. Starring: Phyllis Calvert, Eric Portman, Stanley Baker

The Scamp 1957 – Stephen (Richard Attenborough) befriends a rebel child, Tod (Colin Petersen) who is accused of shoplifting. When Stephen discovers that Tod is living a nomadic, un-schooled existence with his father, he is keen for Tod to start going to school he teaches at and enjoy a normal upbringing. After Tod`s father announces that he is leaving to work in America, Stephen offers to look after the boy whilst his father is away. As Stephen and his wife Barbara (Dorothy Alison) are unable to have children, the arrival of Tod is a welcome blessing. But when the young tearaway struggles to adapt to respectable family life, they begin to question their decision. Starring: Richard Attenborough, Dorothy Alison, Colin Petersen

Frontline Kids 1942 – The Leaders of a gang of street urchins are found jobs as page boys by Nobby Clarkson (Leslie Fuller), a hotel head porter. The rest are evacuated. The hotel manager turns out to be a crook, hoping to double cross jewel thieves coming to the hotel. The boys get on to both sides and, aided by the returning evacuees, fed up with country life, put paid to them both. Smooth-running farce is fair family fun. Starring: Leslie Fuller, Marion Gerth, Anthony Holles 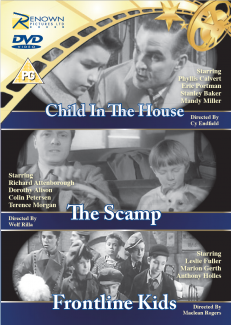 You're viewing: CHILD IN THE HOUSE / THE SCAMP / FRONTLINE KIDS £10.99
Read more