PLUS: FRONT LINE KIDS NEWLY RESTORED WITH SUBTITLES
and an exclusive interview with ANNEKE WILLS

Extra Features: also included on the disc are the following bonus features: FRONT LINE KIDS and an exclusive interview with ANNEKE WILLS, who played Alice Nightingale in Child’s Play, and went on to appear in Some People with Kenneth More and Doctor Who.

What happens when a bunch of unruly children get their hands on an atomic chemistry set? They manage to split the atom and thereby create a new form of popcorn! Mischief soon follows when their little enterprise goes global, despite the interference of a suspicious local detective in this family-friendly adventure. A charming, nostalgic trip to childhood in 1950s Britain, this classic film was directed by Margaret Thomson, previously a prolific director of instructional horticultural, agricultural and medical films for wartime audiences. She went on to work as a casting director at Pinewood Studios, coaching the children on, among other films, Philip Leacock’s Kidnappers (1953). The two children involved (Jon Whitely and Vincent Winter) were awarded honorary Oscars. In the late 1950s she established a production company with her husband Bob Ash, retiring in 1977. The film features an amazing cast that includes early appearances by future stars including Mona Washbourne (My Fair Lady), Ballard Berkeley (Fawlty Towers) and the beloved Peter Sallis, (Last of the Summer Wine). Based on a script by Don Sharp, who also worked on the film as an assistant.

AN EXCLUSIVE INTERVIEW WITH ANNEKE WILLS

Anneke won her first film role at the age of 11 while she was living on a houseboat in Berkshire. The film was called Child’s Play and she gave the £9 fee to her mother. Deciding she wanted to become an actor, she studied drama at the Arts Educational School in London and quickly became one of the busiest performers of her generation. Hear her wonderful memories of Child’s Play and her varied career in this exclusive interview, conducted by Robert Ross.

This British comedy film directed by Maclean Rogers was made at the Riverside Studios in Hammersmith. The film sets were designed by the art director Andrew Mazzei. Set in wartime London, a group of boys assist an incompetent hotel porter in thwarting a gang of criminals. 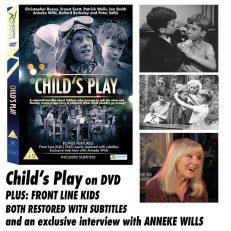