A collection of three TV adaptations of classic children’s stories.

Based on the Eleanor H Porter tale in which an orphaned girl goes to stay with her rich but bitter Aunt Polly, introducing mirth and mayhem into her new home and warming the hearts of all those she meets. This version moves the action from America to early 20th Century England.

Based on Edith Nesbit’s novel. When their father is imprisoned after being falsely accused of spying, three children are forced to move to Yorkshire with their mother (Jenny Agutter, who played Bobbie in the 1971 film version). The local railway fascinates them, and they become friends with an elderly gentleman who vows to help them prove their father’s innocence.

Ballet Shoes (2007), based on the novel by Noel Streatfield is set in 1930s London and tells the tale of three girls who are adopted by their uncle, an eccentric explorer known as Gum and raised by his niece (Emilia Fox) and her nurse. Each of the girls has a dream to fulfil: but when Gum disappears, the feisty and devoted girls find they must fight to survive.
Director: Sandra Goldbacher  Cast: Emilia Fox, Victoria Wood, Emma Watson, Yasmin Paige, Lucy Boynton, Richard Griffiths, Gemma Jones, Peter Bowles. 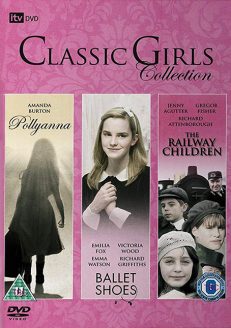