The Flying Scotsman “Flying Scotsman” is known as the most famous steam locomotive in the world. Few people have not heard of this magnificent machine, but fewer know the complicated story of how “Flying Scotsman” became a National Treasure. Illustrated by footage of the engine working on the British railway network, this programme traces the story from the time when the locomotive returned from Australia after achieving the world’s longest non-stop run behind steam – up to its acquisition by the nation and the National Railway Museum at York.

Duchess of Sutherland  This “Steam Classics” records the story of the restoration to main line steam work of one of Sir William Stanier’s magnificent “Princess Coronation” class Pacific’s built for the London Midland and Scottish Railway, number 6233 “Duchess of Sutherland”. After many years of static exhibition, the locomotive was the subject of a complete overhaul which is recorded here for posterity. She returned to the main lines for which she was built, and her early runs form the main part of this film.

City of Truro The 2000th locomotive to be built at the famous Swindon Works of the Great Western Railway was always going to be something a bit special. GWR no. 3440 was to be the immortal “CITY of TRURO”, the first man-made machine anywhere to be recorded at a speed in excess of 100 mph. This programme is a tribute to the graceful Edwardian locomotive, at work on the railways of Great Britain, on both main and preserved lines between 1985 and 1992, after she was restored to full working order by the Severn Valley Railway.

Princess Margaret Rose This “Steam Classics” records the history of Sir William Stanier’s first production Pacific locomotive for the LMS railway. After adjusting over a quarter of a century’s front line service, “Princess Margaret Rose” was bought by Sir Billy Butlin as a children’s’ amusement in a holiday camp. When the children tired of her she was rescued once again and restored to main line use by the members of the Princess Royal Class Locomotive Trust at Butterley in Derbyshire. This is her story – from Pwellhi to Paddington.

Super Power British Pacifics One of the few positives to come out of the gloom of the inter-war years in Britain was the new breed of powerful steam locomotives. First built by Sir Nigel Gresley, these 4-6-2 Pacific’s represented the very pinnacle of express passenger locomotives. Gresley’s A3 Class produced the impressive “Flying Scotsman”, now something of a household name. 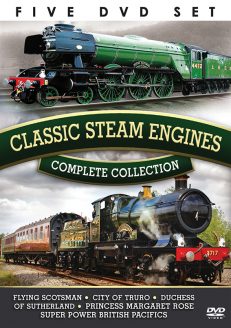