This collection brings together some of the most captivating horror short stories from the nineteenth and early twentieth centuries.

The Man & The Snake by Ambrose Bierce: a man is rendered psychologically paralysed by a snake. Man-Size In Marble by E. Nesbit: newlyweds find the cottage of their dreams, but the previous evil (and dead) owners threaten to return. The Moonlit Road by Ambrose Bierce: the tale of the murder of Julia Hetman from the perspective of her son, a man who may be her husband, and Julia herself, through a medium. The Phantom Coach by Amelia B Edwards: a hunter lost on the moors and seeks shelter from a snowstorm with a reclusive scientist. The Picture In The House by HP Lovecraft: while riding his bicycle in rural New England, a genealogist seeking shelter from an approaching storm enters an apparently abandoned house. Lost Face by Jack London: a criminal must outwit an Native American chief to avoid death by torture. A Confession Found In A Prison by Charles Dickens: the confession of a murderer, written in his cell just before his execution. The Ghostly Rental by Henry James: a passerby investigates an abandoned house and finds an old man who collects rent from a ghost.

True Relation Of The Apparition Of One Mrs Veal by Daniel Defoe: a woman enjoys a visit with an old friend, only to find afterwards that the friend died the day before her visit. Transformation by Mary Shelley: a young man exchanges bodies with a dwarf. The Mysterious Mansion by Honoré de Balzac: a man exacts a bizarre revenge on his unfaithful wife and her lover. The Judge’s House by Bram Stoker:  young man moves into an old mansion where a notorious hanging judge once lived. The Monkey’s Paw by WW Jacobs: three wishes are granted to the owner of the monkey’s paw, but the wishes come with an enormous price for interfering with fate. William Wilson by Edgar Allan Poe: a man is haunted throughout his life by his own double. Canon Alberic’s Scrapbook by M.R. James: a collector of antiquities finds a priceless ancient book, but something evil lies within its pages. 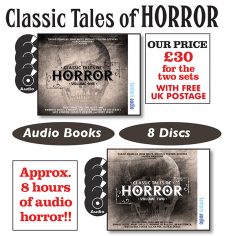