The Central Office of Information (COI) was established in April 1946 and has produced thousands of films reflecting the culture and concerns of the nation. Volume 1 tackles crime, policing, juvenile delinquency and the justice system. A variety of styles and genres deliver crime prevention messages and bolster recruitment. The films on this 2-disc set have been transferred to high definition from the original film elements.  A booklet provides notes and essays. 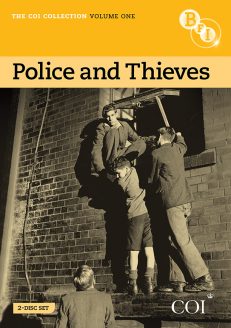