Command Performance
Arthur Tracy and Lilli Palmer star in this 1930`s British romantic drama. With his voice faltering due to nerves, celebrated stage performer â€˜The Street Singer` (Tracy) parts company with the theatre and goes to live in a gypsy camp where he meets and falls in love with Susan (Palmer), an attractive young woman who is unaware of his fame. When Susan`s little sister follows him back to London, a car knocks
her down and he sings to her on the radio before rushing to her bedside, where he is finally reunited with Susan.

Arthur Tracy was a great singing star of the 1930`s and 1940`s. His fine tenor voice and wide and varied repertoire made him a great favourite with radio listeners and vaudeville audiences. Tracy came to Britain in 1932 to fulfil an engagement as top of the bill at the London Palladium. Instant success brought him bookings throughout Britain. 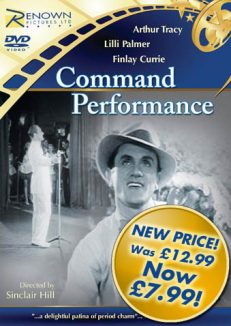