A gang of juvenile delinquents tear up post-war London in Lewis Gilbertís shocking and energetic x-rated drama. Roy is a brash, chain-smoking thug who bullies his friends into subservience. He and his gang assault and rob people on the street, but things get increasingly dangerous when their behaviour escalates to murderous consequences.

One of the first British films to receive an ‘X’ certificate, Cosh Boy is unafraid to tackle a host of taboo subjects, resulting in a penetrating portrait of 1950s Britain and its simmering social tensions.

US title sequence (1952, 3 mins): opening sequence to the US cut, featuring alternative footage and titles.

Fully illustrated booklet with articles by Matthew Coniam, an essay on the fashion in Cosh Boy by Jenny Hammerton and full film credits. 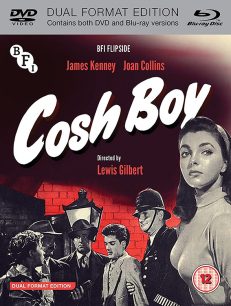