aka Crying Out Loud

Directed by Bernard Vorhaus Mary Lawson and produced by the prolific Joe Rock at Rock Studios. Joe produced 123 tiles, acted in 96 films and wrote 36. Cotton Queen is a story of two feuding Lancashire mill owners, Sam (Stanley Holloway) and Bill (Will Fyffe). They find if they work together they can secure a major American contract. Further trouble ensues when Bills` niece (Mary Lawson) has a romance with Sams` son (Jimmy Hanley) – but all is sorted out at the annual Cotton Queen festival. Cotton Queen was the final film Vorhaus made in Britain. Following the collapse of Julius Hagen`s Twickenham Studios, where he had directed most of his films during the previous few years. He then returned to the United States. Watch out for Gibson Gowland, who played â€œMcTeagueâ€ in Erich Von Stroheim`s silent masterpiece, Greed. 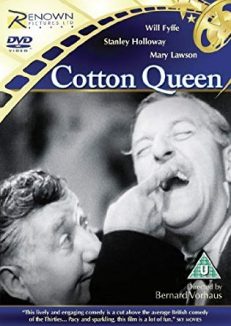