This hit show featured the crime solving exploits of a gallant and charming one-armed private investigator, who greeted his viewers with the famous words “I’m Mark Saber – and this is London”.

An argument over a priceless stamp turns to murder when a stamp dealer is found dead in his office. A rival collector is accused of the crime and the theft of the rare stamp but when he arrives at Saber’s office asking for help to clear his name, Saber must determine if he is helping an innocent man or being played for a fool.

In an audacious daylight robbery an £8000 payroll is stolen from the Diamond Manufacturing Company. When notes taken from the heist begin to appear in circulation and two of the alleged robbers turn up dead, Saber must act quickly before anyone else is murdered.

“Crime is International but so is the Law”. This series plotted the globetrotting adventures of Anthony Smith, the man from Interpol, as he sought to bring master criminals from all corners of the world to justice.

Henry Roper is a well respected banker with an impeccable employment record, or at least he was until he decided to steal £100,000 and flee the country for a new life on a tropical island in the South Seas. Hot on his trail is agent Anthony Smith who must bring both the money and Roper back to London.

When a false passport bearing the name of a missing down-and-out is confiscated at an international airport, Interpol agent Anthony Smith is called in to solve the mystery. Smith soon discovers that this is not the first jet-setting homeless man to have gone missing from a local halfway house. Smith disguises himself and takes up residence at the home but he is playing a dangerous game by using himself as bait. 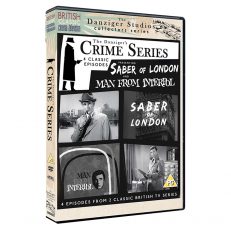