British Bombshell DIANA DORS was one of Rank’s leading ladies, cast opposite David Farrar in Diamond City, (1949). She made Dance Hall (1950) for Ealing studios, with Natasha Perry, Petula Clark and Jane Hylton. In the mid-1950s, she starred in A Kid for Two Farthings (1955) and Yield to the Night (1956), displaying her talent as an actress, but, although talented, she was underrated as a singer, and consequently her recorded legacy runs to little more than the tracks on this compilation. Her highly-regarded LP “Swinging Dors” was recorded for Pye Records in 1960, and is now a collectors’ item. Also included is an earlier 78rpm single, I Feel So Mmm… / A Kiss And A Cuddle, from 1953, plus a track from a 1955 musical comedy, and live performances from 1950s U.S. television shows. A special ‘bonus’ track features a short 1956 American TV interview with Bob Hope. This unique compilation has never previously been collated, while the live TV performances have not appeared on CD until now. 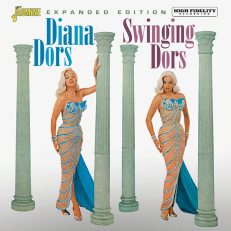