View cart “THE ΩMEGA FACTOR The Complete Series 3-DVD Box Set” has been added to your cart.

Doomwatch was a British science-fiction television programme which ran on  BBC1 between 1970-1972. It featured a scientific agency responsible for investigating and combatting ecological and technological dangers. The master tapes were wiped soon after transmission, but those episodes that still exist are collected together in this 7-disc set: episodes 1, 4, 5, 6, 7, 8, 10 and 11 from Series 1; all episodes from Series 2 and episodes 4, 6 & 12 from Series 3. Also includes the previously un-transmitted episode 12 of Series 3 “Sex & Violence”.

Now on DVD for the first time, this series collection includes the BBC documentary The Cult of Doomwatch about the history and making of the programme and the incredible fandom it spawned. Groundbreaking science-fact series Doomwatch explores the scientific dangers lurking behind some of our greatest fears. Led by the gruff but incorruptible Doctor Spencer Quist (John Paul), the Doomwatch team struggle tirelessly to protect the people and planet from the never-ending threat of science gone wrong. Quist is assisted by Doctor John Ridge (Simon Oates), a chemist and notorious ladies man with a decidedly shady past and series heartthrob Tobias Wren (Robert Powell), a conscientious researcher who is deeply committed to his job. Over three dynamite series the team deal with genetic engineering, chemical waste, nuclear rockets, pollution, wildlife culls, terrorist plots and industrial sabotage, to name just a few. The appeal of the show lay in its commitment to exposing real scientific threats. An episode concerning the use of hormones in fish farming even sparked debate in Westminster! Doomwatch was created by Gerry Davis and Kit Pedler, the creative duo behind one of Doctor Who’s most memorable villains – the Cybermen. With an audience of 13 million, Doomwatch saw popularity on an unprecedented scale for its Monday night slot and in our current age of anxiety over climate change, the stories and fears it uncovered are as palpable as ever. 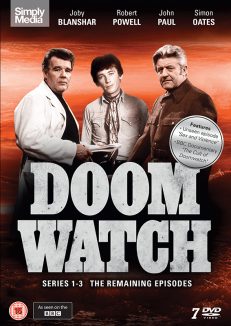