This 3-DVD set features a trio of Doug McClure’s best-loved action adventures: At The Earth’s Core, Warlords of Atlantis and The Land That Time Forgot.

Doug McClure first achieved fame as Trampas in The Virginian in 1962. He also appeared in Shenandoah in 1965, with James Stewart and Katharine Ross. During the 1970s he was cast as the lead in many action adventure films, long before Indiana Jones arrived. The films were famous for epic stories, exotic landscapes and giant monsters. They were innovative in their portrayal of the creatures, with effects relying on stop motion, rear projection, models and full-sized props, providing thrilling visuals for the time. McClure and director Kevin Connor found a formula that kept audiences entertained for years and the films are now being discovered by new audiences, finding their place in film history.

When eccentric Victorian scientist, Dr Abner Perry (Peter Cushing), and his assistant develop a high powered drill they decide to test its capabilities in a remote Welsh Mountain. The drill proves too powerful and plunges the duo into a vast cavern at the earth’s core where evil prehistoric birds have enslaved a tribe of humans. Can the Doctor and his assistant help rescue the tribe and escape the evil clutches of their flying nemesis? Director: Kevin Connor. Stars: Doug McClure, Peter Cushing, Cy Grant, Caroline Munro, Godfrey James, Keith Barron & Robert Gillespie.

A perilous nautical tale of mutiny, murder, hidden treasure, giant sea monsters and lost worlds. On the sailing ship Texas Rose, an archaeology
professor, his scientist son and an engineer are on a quest to find the lost city of Atlantis, when a giant octopus attacks their ship. They awaken within a mysterious underwater realm, a deep-sea kingdom colonised by an advanced alien race with a dark secret. Director: Kevin Connor. Stars: Doug McClure, Peter Gilmore, Cyd Charisse, Shane Rimmer & Lea Brodie.

When a German U-Boat torpedoes a British supply ship, the survivors force their way on board and overpower the German crew. However, they drift off course and find a strange island, where they are attacked by huge prehistoric monsters and a tribe of primitive humans. Director: Kevin Connor. Stars: Doug McClure, John McEnery, Keith Barron & Susan Penhaligon. 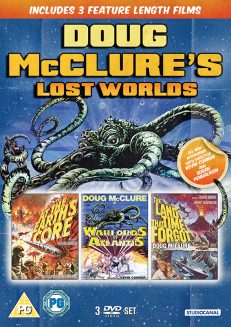