The classic medical drama that became a sensation!

All 12 episodes of the first series of the popular 1960s medical drama. Based on A. J. Cronin’s book Country Doctor. Two doctors and their unflappable housekeeper Janet deal with daily trials and tribulations at a medical practice in a Scottish village during the aftermath of WW1. The series was a hard edged medical drama, spiced with sentimentality and fine characterisations.

Set in a local medical practice in the fictional post-war Scottish village of Tannochbrae during the 1920s, this BBC medical drama became one of the most popular programmes of the 1960s, inspiring other popular series such as Doc Martin and All Creatures Great and Small.

The series follows the experienced and mildly conservative Dr Cameron (Andrew Cruickshank) and his adventurous and enquiring junior partner Dr Finlay (Bill Simpson), and the daily struggles they face looking after patients at the Arden House medical practice. Both doctors frequently clash over preferred methods of dealing with patients, with Cameron preferring traditional medicine to Dr Finlay’s more contemporary methods.

The series was first broadcast in 1962, becoming a cult sensation by 1965. A Bill Simpson Fan Club was set up, Andy Stewart’s Dr Finlay was in the Hit Parade for five weeks, and Andrew Cruikshank was invited to the British Medical Association’s annual dinner to speak on medical matters as if he were a real GP!

The show’s success was due to compelling stories and excellent casting. Recurring characters included Dr. Snoddie, played by Eric Woodburn and Mistress Niven, the district nurse, played by Effie Morrison.

Location work for the series was filmed in the town of Callander in Perthshire, but the first six episodes were filmed in Tannoch Drive, Milngavie, where the fictional Arden House was situated. It was ducks and swans on the loch there that formed part of the opening sequence. The interior scenes were shot in BBC studios in London and Glasgow.

The series was based on A. J. Cronin’s book, Country Doctor. Cronin was born in Cardross and graduated in medicine from Glasgow University in 1919. A chronic duodenal ulcer prompted a career switch and he began writing books, TV and film scripts, including the Oscar-nominated The Citadel. 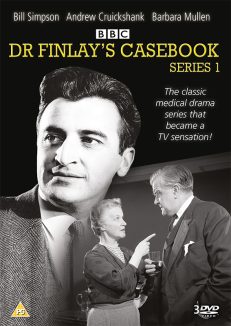