View cart “STAGECOACH WEST 8-DVD Box Set with optional subtitles” has been added to your cart.

If you bought Series 1, you will enjoy this second series.
These compelling episodes are also complete stories in themselves.

The ten surviving episodes of the second series of the highly popular 1960s medical drama. Two doctors and their housekeeper deal with the daily trials and tribulations of a medical practice in a Scottish village between the wars. This much-loved series centres on a general medical practice in the fictional rural Scottish town of Tannochbrae between the wars. These ten episodes are all that remain of the original second series; the rest were accidentally lost from the BBC archives. Following his service in World War II, Dr. Finlay returns to the practice at Arden House, at a time when the National Health Service is about to be instituted. The adventurous and forward-thinking Dr Finlay is now firmly established in the community, works alongside the orthodox Dr Cameron (Finlay’s senior partner in the practice), played by Andrew Cruickshank. Janet, their unflappable housekeeper, played by Barbara Mullen, is courted by the irascible Dr Snoddie, played by Eric Woodburn, who disparages Finlay’s modern methods. First broadcast in 1962, Dr Finlay’s Casebook was a cult sensation by 1965. The famous theme tune, Trevor Duncan’s March from A Little Suite, was cited by Time Out Magazine as ‘one of the best TV theme tunes ever’!

Episodes:
1 A Time For Laughing
2 Clean Sweep
3 The Heat Of The Moment
4 Cup, Hands Or Cards
5 The Polygraph
6 A Present From Father
7 A Test Of Intelligence
8 The Spirit Of Dr. McGregor
9 The Red Herring
10 The Confrontation

One of the BBC’s longest running and most successful TV series – with storylines that are just as compelling and relevant today. 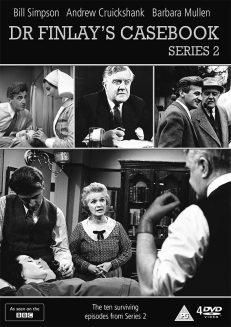