For those who bought Series 1 and 2, here are the surviving episodes from Series 3 and 4 in a six-disc set. If you haven’t seen Dr Finlay yet, you are certain to enjoy these medical tales from 1920s Scotland! Bill Simpson stars as Doctor Finlay, determined to bring a sleepy Scottish village into the 20th century. Andrew Cruickshank is the crusty senior Doctor Cameron and Barbara Mullen is the unflappable Janet, housekeeper at Arden House medical practice.

The team encounter a suspicious car crash, an outbreak of the measles, a soldier in need of an amputation, a local dog infested with rabies – and Doctor Finlay tries his hand at hypnosis. First broadcast in 1962, the drama had become a cult sensation by 1965. A Bill Simpson Fan Club was set up and Andrew Cruikshank was invited to the British Medical Association’s annual dinner to speak on medical matters as if he were a real GP!

Series 3 episodes: A Right to Live / Charity, Dr Finlay / The Gate of the Year / Off the Hook / The Next Provost But One /A Little Learning / Belle / In Committee / Another Opinion/ The Spinster/ Medical Finance / Beware of the Dog/ Doctor’s Lines/ The Deceivers/ The End of the Season / A Woman’s Work / The Immortal Memory

Series 4 episodes: The Phantom Piper of Tannochbrae / Written With the Left Hand / Crusade

One of the BBC’s most successful TV series, Dr Finlay’s Casebook was a national institution, regularly enjoyed by an audience of 12 million. 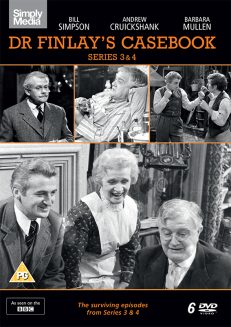