ELSTREE STORY AND ELSTREE CALLING Special Offer £20 for both DVDs!

ELSTREE STORY AND ELSTREE CALLING
Special Offer £20 for both DVDs!

Richard Todd tells the story of Elstree Studios. Starting in 1927 when The White Sheik, was made there, Elstree Story features excerpts from over forty productions – including Hitchcock’s Blackmail, the first feature-length British talkie ever shown. With early appearances by some of cinema’s greatest stars; it is a memorable and evocative journey through the years. This film celebrates a legendary film studio; the pictures made there and the stars and technicians who helped make it one of Europe’s greatest film production centres.
SPECIAL FEATURES: Revisiting the Elstree Story; Gallery; promotional material.

British International Pictures released Elstree Calling in 1930 in response to the lavish revues being produced in the Hollywood studios, and was Britain’s first musical film. This all-star vaudeville show features performers from some of the most popular London productions of the era. Compèred by Tommy Handley, the film presents nineteen comedy and musical sketches. Alfred Hitchcock, then under contract to BIP, was responsible for creating the sketches and linking material, including segments about a man trying to “tune in” the revue on his television set. Includes sequences in their original artificial colour, using the Pathécolor system.
SPECIAL FEATURES: Image gallery. Includes full opening overture (fades up from black). 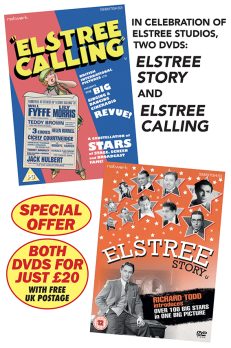 You're viewing: ELSTREE STORY AND ELSTREE CALLING Special Offer £20 for both DVDs! £20.00
Add to cart