ELSTREE STUDIOS: A CELEBRATION OF FILM AND TELEVISION Hardback Book

ELSTREE STUDIOS
A CELEBRATION OF FILM AND TELEVISION
Hardback Book

Elstree Studios: A Celebration of Film & Television is a large, hardbacked coffee table book with a gold printed dust jacket with images from some of the many films produced at Elstree over the years. Inside the book cover itself are montages of Elstree film posters and the beautifully printed pages, some with gold backgrounds, are filled with photographs and commentary on the history of the studios. This lavish tribute to ninety years of film and television production is the perfect gift for any film fan and these copies are exclusively signed by author Morris Bright. The renowned film studios were home to some of the most successful film and television programmes produced in the UK, including Dusty Ermine, Cotton Queen, The Hasty Heart, The Magic Box, The Nanny, Angels One Five, Yield to the Night, The Punch & Judy Man, Sir Francis Drake, Small Hotel, The Young Ones, The Devil Rides Out, Woman in a Dressing Gown, Sparrows Can’t Sing, One Million Years B.C., The Champions, For the Love of Ada, The Man Who Haunted Himself, The Boys From Brazil and many more. With contributions from actors, directors and behind-the-scenes personnel, this book traces the studios’ history, from humble beginnings, through the golden age of film, tough times and the threat of closure to becoming the go-to London film and television studio today. 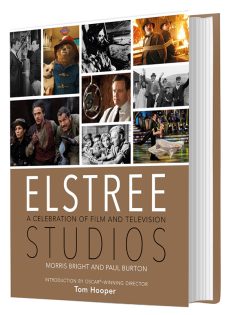