View cart “Burke’s Law Box Set” has been added to your cart.

Enemy at the Door The Complete Series in an 8-DVD Box set!

Enemy at the Door The Complete Series in an 8-DVD Box set!

All 26 episodes from the TV drama series, filmed on Jersey but set in Guernsey, portray the daily life of Channel islanders under German occupation during WWII. As the only British territory to be occupied by the Nazi regime during WWII, the Channel Islands represented a glimpse of what life in Britain could have been like if Germany had won the war. Blending archive footage with contemporary film techniques, the series achieved a gritty realism that went a long way to recreating the fear and uncertainty in the population at the time.

Enemy at the Door’s achievement is in presenting stories and characters that explore the complex issues of alienation and wartime collaboration in a multi-faceted and subtle way, with a sense of day-to-day reality.

Watch Enemy at The Door every Sunday at 9pm Only on Talking Pictures TV. 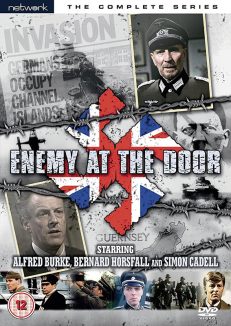