Max Carrados is a fictional blind detective in a series of mystery stories and books by Ernest Bramah, first published in 1914.

The Max Carrados stories appeared beside Sherlock Holmes stories in the Strand Magazine. Bramah was often billed above Arthur Conan Doyle and the Carrados stories frequently outsold the Holmes stories. The beneficiary of a large inheritance from an American relative, Carrados is foremost a gentleman who undertakes sleuthing only as an avocation. Though equipped with a keen observer in the perfect manservant Parkinson, the blind Carrados does not merely sit around deducing: he makes his own observations
with ears, nose and fingertips. Carrados makes a point of noticing what others don’t, in his case precisely because, as he says, “I have no blundering, self-confident eyes to be hoodwinked.”

The five stories included in this set are: The Coin Of Dionysius, The Knight’s Cross Signal Problem, The Tragedy At Brookbend Cottage, The Last Exploit Of Harry The Actor and The Game Played In The Dark.

Read by Arthur Darvill (Broadchurch, Legends of Tomorrow and Doctor Who) and featuring music by acclaimed composer Jon Nicholls, these adaptations
were originally broadcast on BBC Radio 4 Extra in 2011. 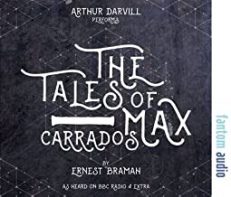