Films with a Beat Boxset

A selection of films that preserve a fifties and sixties Britain we remember with affection. 8 film collection on three DVDs.

Live It Up 1963 – Directed by Lance Comfort; starring: Kenny Ball and his Jazzmen, David Hemmings, Jennifer Moss, Gene Vincent. Dave and his mates are GPO despatch riders who dream of becoming as big as The Beatles with their own group The Smart Alecs.

Every Day’s a Holiday 1965 – Directed by James Hill and starring John Leyton, Mike Sarne, Ron Moody, Grazina Frame, and Freddie and the Dreamers. The plot involves a group of teenagers who take up jobs working in a seaside resort for the summer and find friendship, love and music together in a pop musical.

Be My Guest 1965 – Director: Lance Comfort. Stars: David Hemmings, Steve Marriott, John Pike. A family from London move to Brighton to run a hotel. In order for them to
publicise the hotel they set up a musical talent show, the “Amateur Upstairs”, and every local band believes it could be their one chance at the big time.

The Golden Disc 1958 – Director: Don Sharp. Stars: Lee Patterson, Mary Steele, Terry Dene. A young pop composer and singer bankrolled by Aunt Sarah open a coffee bar. They are joined by budding singer Terry Dene as himself. Dene sings at the café and unable to get a record deal they start their own record label.

Tell Me Another: Exclusive Interviews with Acker Bilk filmed in 1976 – Extracts of a selection of topics covered by Acker Bilk and personal anecdotes as told to Dick Hills on the show Tell Me Another. 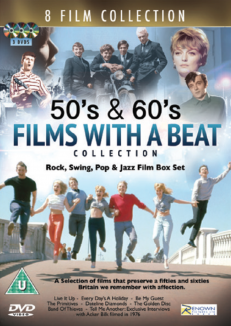